Entry level dog harness and running outfit is light and well made.

I’ve been using this set up with my springer spaniel Ruby for over a year now. As a regular canicrosser, I already use the Ruffwear Omnijore system, and that fits both of us really well. So I was keen to try this new addition to Ruffwear’s range.

Everything is well made – but very lightweight. The human belt doesn’t have leg loops (like my Omnijore belt), but fits well, and has an open expandable pocket on one side and a roomy, zipped pocket on the other. There’s a bottle and bottle holder too. 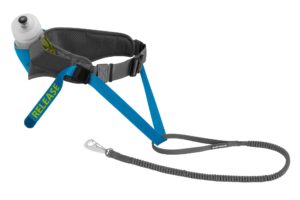 The Ridgeline bungee lead that come with the belt is much shorter than normal canicross lines, at 1m (stretching to 1.8m), and uses Ruffwear’s patented Crux Clip. Personally, I thought Ruby would break it, as it seems much less robust than my current lead, which has the familiar talon clip.

Finally, the dog harness is a good design, and was actually a very good fit for Ruby. I particularly liked the Velcro pocket on the top of the belt which is great for spare poo bags, and contains a cord for an ID tag.

The harness needed some adjustment, and at first I thought it was too small, as I couldn’t see how to slacken off the straps under the chest. It didn’t take long to sort it all out though. Ruby is a small according to the Ruffwear sizing guide which turned out to be helpful when buying online.

I was worried that the waist belt might ride up or slip down while running – but none of this happened. I put keys in the zipped pocket (there’s a clip inside there to hook them to) and poo bags in the foldover pocket. There is room for a phone in the zipped pocket too. There is a quick release clip for unleashing the dog in an emergency (they might be pulling you off a cliff).

On my first run, Ruby pulled out front at first, but as the lead/line is shorter than we’re used to she tended to come to my side and trot alongside me. This isn’t perfect for canicross, where you want the full power of the dog pulling from the front, but if you’re just going for a gentle jog with your dog, it’s perfectly fine. The best part about it is that you can run (or hike) hands free – and if you haven’t tried this, you will feel so liberated. If you are hiking, and use walking poles for example, this system is a winner, while runners will feel more balanced and in control when the dog is pulling from your core instead of your shoulder.

I’ve used this harness set-up for training runs on the trails, running to work with Ruby and hiking where there might be livestock. It’s great. The dog is under control, thanks to the shorter lead, and you can carry stuff that’s easy to access. I haven’t used it in any official canicross races, and I probably wouldn’t. Not that it isn’t up to it, but I think there are much better and more robust systems available – at a cheaper price point. My fears about the lead have been unfounded. Ruby has pulled it of shape a bit, but after a year of pretty constant stretching, it’s still doing its job. 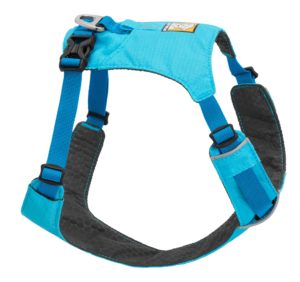 The dog harness is compatible with other Ruffwear products, which is useful. The Aira raincoat, for example has an opening for the lead clip on the harness, so they can be worn together, and there’s an attachment for the  Ruffwear Beacon night light.

This system would suit someone looking to get into canicross, or just going for a hike with their dog. Anyone running with a dog at parkrun should consider this set up too. I see too many people running with normal collars and leads in events like this, and that has to be bad for both runner and dog.