This new 12 hour handwarmer from iconic lighter brand Zippo is a little larger than the 6 hour version, but is essentially the same.

If you’ve never used something like this before, it can be a bit of a leap of faith setting fire to a reservoir of lighter fuel and then sticking it in your pocket. This product should be treated with care, and we probably wouldn’t recommend that children used it.

The handwarmer is made of stainless steel and comes in chrome, black or orange. The ventilated top detaches to reveal the catalytic burner, which allows a ‘flameless burn’ – thus allowing you to safely place the warmer in your pocket.

It comes with a drawstring bag (more of which later) and a filler.

The instructions are quite lengthy, and also in microscopic type, so a bit tricky to read if you are of a certain age (like me). 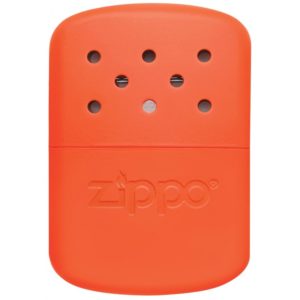 I filled the filler (about half full as I didn’t want the full 12 hours of heat), and then removed the catalytic burner to reveal the filler hole on the base of the handwarmer. It was easy to fill with lighter fluid (in this case Zippo, but any type will do). Then I replaced the catalytic burner and applied a flame to it. You could use a match or a lighter, but for the first time use, you need to hold the flame over the burner for around 10 seconds, so I used a gas click lighter. You must make sure that there is no naked flame present and that the burner is lit (or giving off heat) without a visible flame.

This is quite difficult to do if you are outdoors, as it’s not that easy to see. I held my hand over the burner and felt heat from it, so assumed it was lit.

So far, so good. My handwarmer was heating up nicely, and I began my walk in sub-zero temperatures.

I had decided not to wear gloves to test the handwarmer properly. I found the size of it a bit big for my small hands, but I guess this is a matter of preference, plus the fact that this model burns longer than the six hour model (which is a wee bit smaller). The warmer really is cosy, and when I found my other hand getting cold I just swapped pockets. If you wanted both hands as warm as each other at the same time, then you would be best buying two, but that might be going too far! You can even slip the warmer into your gloves as it is quite slim. While I was walking I was conscious that I should try to keep the warmer upright, so that I didn’t have any accidents, but generally I forgot about it and got on with my walk.

I think it would be useful for winter camping too, as you could keep it in the tent and it would give off a little bit of heat through the night. The instructions do say though, that once you have completed your walk, there is no way of switching the warmer off – it just keeps going until the fuel runs out. I half filled mine and it did a good six hours, before eventually cooling. You must place it on a non flammable surface though, just to be on the safe side.

I think this would suit fishermen, birdwatchers and nature photographers – or anyone that is hanging around in the cold. Walkers, because they are moving, tend to have a bit of circulation flowing, so are less likely to need a hand warmer – but it all comes down to personal preference – and of course, the weather.