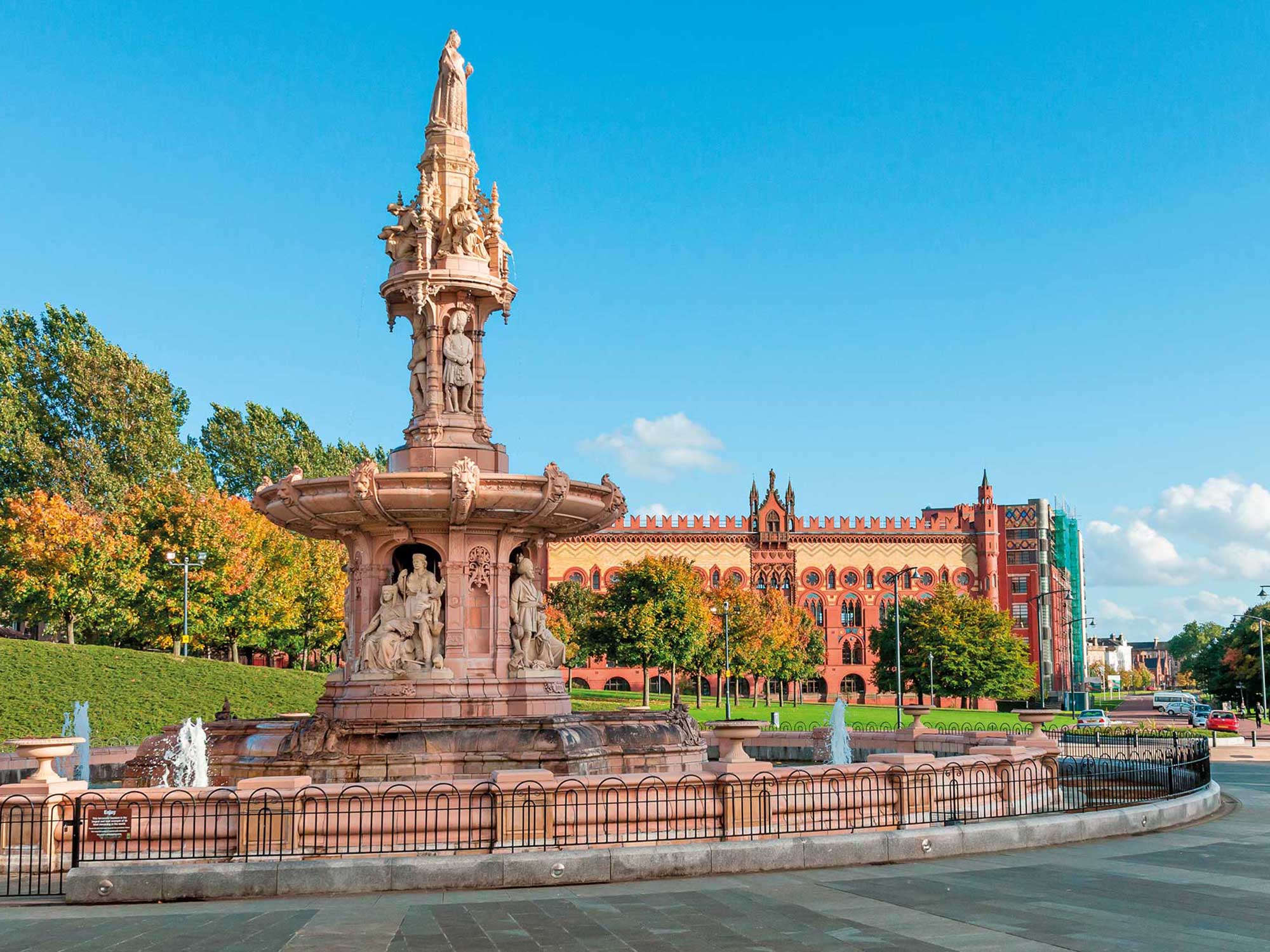 While staying at Glasgow Youth Hostel near Kelvingrove in the west end of the city, Neil Braidwood takes a running tour with Elspeth Luke from Run the Sights.

I met Elspeth at Glasgow Central Station at 6am. There weren’t too many people around, and Elspeth explained that often people who are on business trips like to start a tour early so they can go to work afterwards.

We warm up by stretching, and set off jogging at a comfortable pace along the Glasgow pavements, heading steadily to the River Clyde. Elspeth explained that the city was shaped by the river – Glasgow became the shipbuilding centre of the world, peaking in the 1880s with around 40 shipyards. Today, just two remain, but we turn our backs to them and head eastwards along riverside paths upgraded after the Commonwealth Games came to Glasgow in 2014.

We reach Glasgow Green within a few minutes, and take a short breather here to take in what is the UK’s oldest public park. The People’s Palace and Winter Gardens are here, although they are closed at this time of day. Originally opened in 1898 as a cultural hub for the growing population, the museum and gallery underwent extensive restoration in the 1990s.

At the front of the museum there is the huge terracotta Doulton Fountain (the largest in the world), with a lifesize statue of Queen Victoria perched on top. We press our noses up to the windows of the conservatory at the rear, marvelling at the opulence and sheer scale of the place. Another eye-catching Victorian building not far away is Templeton on the Green – a stunning former carpet factory built in the style of the Doge’s palace in Venice, now a business centre.

We continue running, this time past the famous Barras Market, named after the handcarts, or barras, used to sell goods from in the early 1900s. All manner of items can be bought here, and it’s where you can experience the ‘grittier side of Glasgow’, Elspeth tells me. We press on, as a wind is picking up and we need to keep warm.

We arrive at Glasgow Cathedral, which stands on the site of a church founded by St Mungo, the patron saint of Glasgow, in the 6th century. I am beginning to feel a real sense of history in this city, and make mental notes to come back to visit when I have more time.

Behind the cathedral, we begin our first climb, upwards to the Victorian graveyard known as the Necropolis. There are over 50,000 people buried here, with some of the tombstones being built by eminent architects of the day, such as Alexander ‘Greek’ Thomson. From our high viewpoint, we have another rest while Elspeth points out various landmarks across the Glasgow skyline.

It’s time to return, and we weave our way back, through the grounds of the University of Strathclyde, and along to George Square – the site of more imposing buildings such as the City Chambers, one of the city’s most prestigious buildings which features a beautiful marble interior.

There are more commuters now, and I find myself dodging the suits on the pavements, and I am glad we set off early. As we approach Central Station we have covered just over 8km in just under an hour. I wasn’t looking for a personal best time – just a glimpse of a city I’d like to get to know better.

• This article first appeared in SYHA Hosteller magazine in 2017 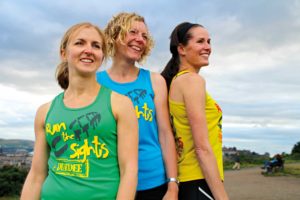 Not content with co-founding a dog friendly running club called Cani-sports Edinburgh, running evangelist Ali Wyllie founded Run the Sights in the city in 2015. In 2016, she launched tours in Glasgow and Dundee with Elspeth Luke and Elaine Omand respectively.

All accomplished runners and qualified first-aiders, they offer city tours that can take in urban scenes or parkland – it’s up to the individual. You can even have a bespoke tour created based on where you want to go and obviously your fitness levels. Many visitors to the city want to find out as much as they can in a short space of time. “We’re not historians or fitness instructors, but we are able to point out interesting landmarks while having a bit of fun along the way,” says Ali. 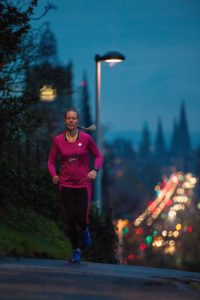 Lucja Leonard is an Australian who moved to Edinburgh in 2013. She set up Edinburgh Run Tours after visiting Memphis in the US in 2009, and taking part in a run tour there to see the sights and keep fit. On returning to Edinburgh, she thought she could combine her training for ultra-marathons while showing off her adopted city to tourists.

Taking groups of up to a dozen runners, Lucja has several routes across the city which cater to the needs of the group. “Some people are just here for a day, so they want to stop and take photographs along the way – others are looking for a personal best time, and so there are no breaks to take in the view,” says Lucja. “Another lady from the US wanted to try some whisky while she was here. She was travelling alone, so asked if I would have a dram with her. We stopped in at a bar at the end of the run and had a few samples. I wouldn’t recommend any before the run!” 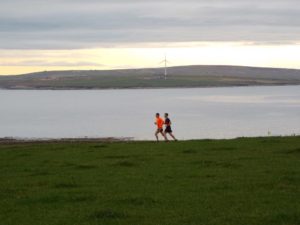 Active couple Gareth and Anne-Marie Squire moved from Surrey to Kirkwall to manage the youth hostel there in 2013.

Anne-Marie couldn’t start straight away, as she was running her first London marathon, so flew up just after she had completed it!

The running scene in Orkney is well established, with the Hoy half-marathon having been going for 30 years, and the Wideford Hill race a popular fixture too. Kirkwall has had a half marathon for a while, but last year staged the first marathon.

Anne-Marie trains regularly for these and other events, running a 5k loop every Monday at 5pm. Other runners and friends gradually tagged along, and eventually the Scapa Loop Group was founded. It’s very informal, and free if you are staying at the youth hostel and have your trainers with you. Almost all on quiet back roads, the loop takes in the spectacular Scapa Bay, scene of the scuttling of the German naval fleet in the First World War.

All abilities are welcomed, with some people joining in who have never run before.