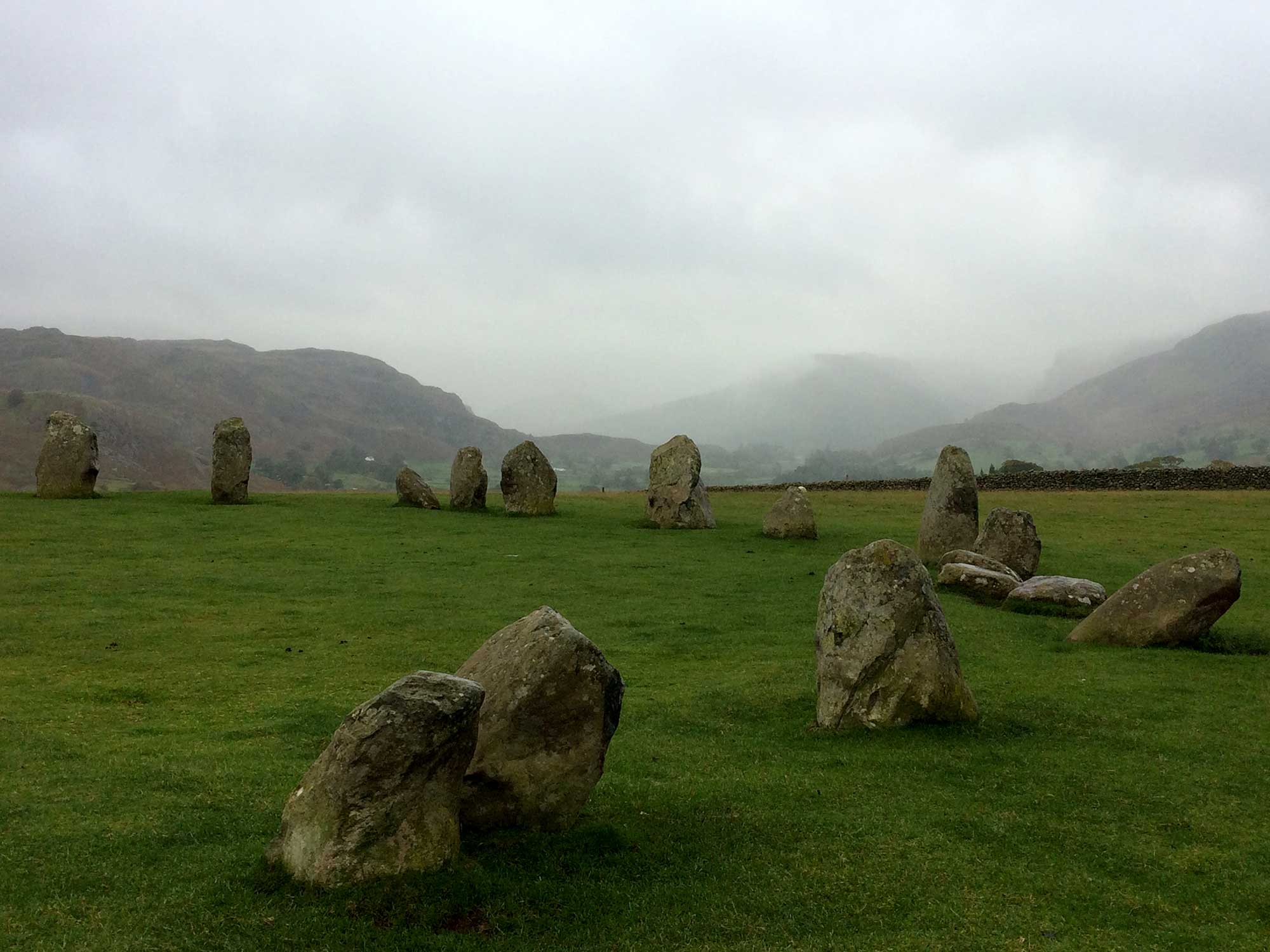 Neil Braidwood returns to the Lakes and rediscovers old haunts.

I have mixed memories of the Lake District. My dad used to take us there on holidays when I was about 12 years old, and I remember it taking hours to get there in the car. The scenery, though, once we had arrived, was jaw dropping. Strangely, though we lived in Scotland, my dad chose to drive south to the Lakes, and not north to the mountains on our doorstep. That’s parents for you. Me and my sister were kitted out in nylon cagouls and stout leather boots from Frank’s Army Stores in Kirkcaldy. And off we went. We didn’t have much choice.

Dad’s safety equipment consisted of a box of matches (special ones that would light in high winds and rain) and a heliograph. For those that don’t know, this is a mirror that you use to attract attention when stranded in the mountains. Well, it was 1974 and mobile phones hadn’t been invented yet. He did have a map though.

Most of our excursions were low level affairs taking in tarns and woodland, but on one memorable occasion, dad took us up Helvellyn. This is the third highest peak in the UK, and there was snow at the top when we got there. Sadly, not the best view though as it was very foggy.  Our descent was via Striding Edge, a narrow ridge not for the faint hearted. With sheer drops either side, it’s a technical walk, requiring some scrambling and a steady nerve. It took us well out of our way, and added miles to our return journey, with the added misery of driving rain.

Amazingly, we returned to the Lakes for a couple of years after, but rarely spoke again of that ‘adventure’.

Now 56, I wanted to show my wife Maureen why we used to go there. She’s from Orkney, and has never visited the Lakes, so we packed the car and headed off for a long weekend.

We had booked into the Beech Hill Hotel on the banks of Lake Windermere, one of the biggest lakes in the region. As we headed into the National Park, Maureen couldn’t fail to be impressed by the mountains ahead of us, and when we came to Grasmere, she felt like she was being transported back in time. It felt a bit like that for me too actually, as my dad took a cottage here when we did our Helvellyn excursion. We parked up, and I found the cottage (now a tea room), and also the Grasmere Gingerbread shop. This tiny building has been selling the famous snack since 1854, and I vividly remember standing on the doorstep as the shop opened to buy a pack for breakfast! I think it cost 30p in those days. It tastes exactly the same, but the price has increased a bit. There are Japanese tourists lining up outside now too.

Our hotel is just south of Bo’ness on Windermere, and has been a hotel since the early 1900s. It’s easy to see the original building which is built in the traditional Lake District style. Many extensions have been added over the years, including an indoor swimming pool and spa, bringing the hotel into the 21st century. The views across the lake are spectacular, even as the fog draws in, and our room in particular has a bay window with an uninterrupted vista.

The main hotel entrance is at road level, but the grounds sweep hundreds of metres below to the lake, meaning that many of the extensions, including the swimming pool and spa, are only accessible by stairs.

Once unpacked, we head for dinner, and enjoy a drink in the bar beforehand. As it is autumn, it’s dark already, but I can imagine on a summer’s evening, the terrace here would be busy with guests gazing out over Lake Windermere as the ferries ply their trade up and down the channels.

Our waiter brings us appetisers of mini Parma ham sandwiches with pancetta and cream cheese spirals, while we have a drink at the bar. 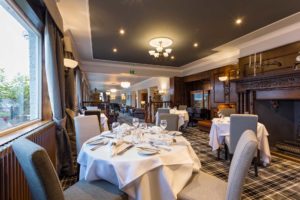 The restaurant within the hotel is called Burlington’s, and the tables are decorated with fresh flowers which was a nice touch. The restaurant prides itself on locally sourced produce, so Maureen chose ‘Taste of the Lakes’ as a starter. This was a selection of appetisers: Cartmel Valley rabbit spring roll and Holker Hall partridge roulade served with an English Lakes gin and beetroot consommé. Maureen described this as simultaneously fresh and earthy!

The weather had dictated that we opted for substantial meaty dishes, so for a main, Maureen had lamb rump, with fondant potato and minted Cavolo Nero, while I chose slow-roasted ox tail accompanied by parsnip puree, braised red cabbage along with horseradish and potato croquette and girolle mushrooms. The portions were decent, and all beautifully presented on the plate. My ox tail came with a hot jus to pour over, and all the flavours combined deliciously. Maureen’s lamb was tender and cooked to perfection.

We shared a local cheeseboard for afters, and relaxed in the lounge with decaffeinated coffee and truffles before climbing the stairs to bed.

Next day, after a hearty breakfast, we make plans for the days ahead. The weather has taken a real turn for the worse, and our view of the western fells across the lake is obscured by thick fog. The rain is drizzly, but threatening to get much worse. We had planned to do some walking today, but decide instead to visit Dove Cottage, William Wordsworth’s home, just outside Grasmere. I am amazed that my parents didn’t take me here when we visited all those years ago, at least, I have no recollection of it. The guided tour was fascinating, and the tiny cottage feels pretty much unchanged since Wordsworth, his wife and sister Dorothy lived here between 1799 and 1808. It was a prolific time, and it was here he wrote arguably his most famous poem, I Wandered Lonely as a Cloud.

The Heaton Cooper Studio is a small family run gallery in the town, and it has a Scandi influenced cafe attached, called Mathildes. We have a great coffee and cake here, just relaxing and watching the world go by. It’s October, but the town is still busy with walkers, despite the poor weather. There are easy walks within reach, such as a traverse of the nearby lake, or a longer walk to Easedale Tarn. 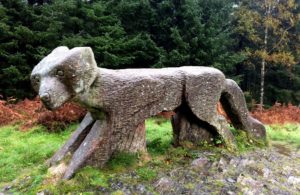 The next day, the weather was still miserable, however, we were determined to visit Grizedale Forest, and have a walk there. It’s well marked and popular with families, as dotted around the forest are sculptures and artworks to keep everyone interested. I do remember coming here with my parents in the late 70s, probably not that long after the art had been installed. It was one of the first forest art trails in the country, and since then, there are cycling routes, Go Ape, an education centre, a 16-bed hostel and a cafe.

The rain was pretty relentless, but we soldiered on through the woods and encountered various sculptures as we went. Our waterproofs were well tested.

Later on, the sun broke through long enough to allow us a magical moment at Castlerigg stone circle, near Keswick (main picture). There are a few standing stones in the Lakes, but Castlerigg is one of the most impressive. Estimated at around 5,000 years old, the 38 stones/boulders are in a stunning location, allowing a panoramic view of the mountains all around. With the entrance facing midwinter sunset, the circle has much in common with other stone circles in other parts of the country.

Despite the weather we’d had a great time – me sharing my memories with Maureen, while she discovered a whole new world.

A walk of two halves on Arran