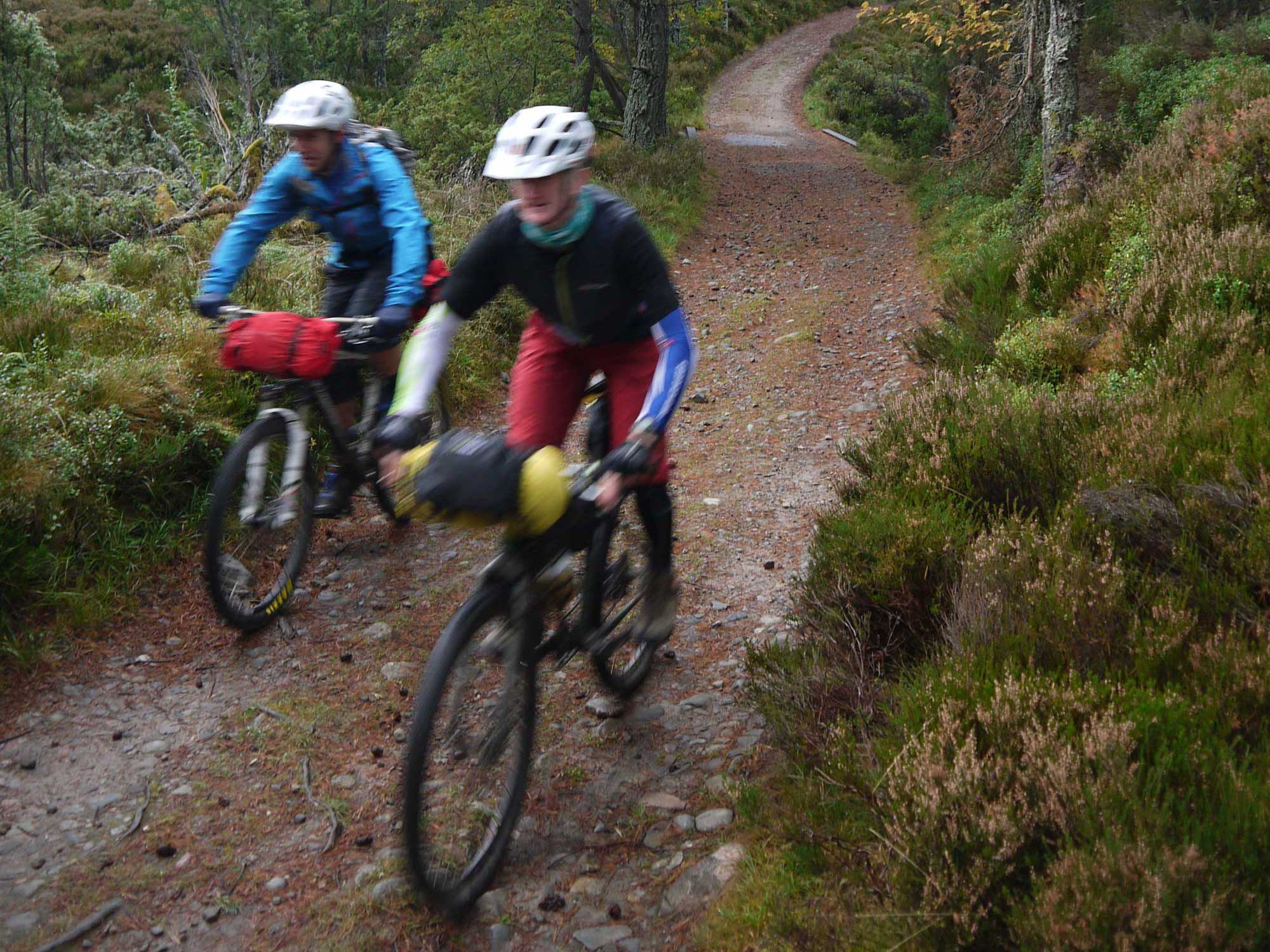 Bikepacking is fast becoming one of the most popular ways to get deep into the countryside with your bike, so when Neil Braidwood was given the opportunity to take a trip in the Cairngorms, he jumped at the chance.

The Cairngorms National Park is one of our most treasured landscapes, easily accessed, yet still feeling like a true wilderness. With mountains, valleys, rivers and a network of signposted paths, it is home to red squirrels, ospreys and about a quarter of Scotland’s native forest.

Jim Sutherland, who owns nineonesix-guiding, was keen to take me on a route that he had preplanned – making the most of the byways that criss-cross the park and taking in Cairngorm Lodge Youth Hostel – a former shooting lodge next to Loch Morlich.

Jim sent me a digital GPX file which showed the two-day journey in glorious two dimensions, on a digital Ordnance Survey map, starting and finishing at Kingussie. With roughly 40km to cover on day one and then another 60 on day two, I felt I needed to get into shape. I am a weekend mountain biker, mainly visiting places like Glentress in the Borders or Comrie Croft in Perthshire. Those manicured trails are difficult to get lost on, whereas we would be well off the beaten track, and travelling across much rougher terrain.

I met Jim and his guiding colleague Ian Sikora at Kingussie railway station, and our first journey of the day was down the high street to have a bacon roll and pore over the maps. We would need to stoke ourselves with food throughout the trip, as we would be burning calories rapidly, and would need to keep our energy up. Both Jim and Ian are qualified mountain bike leaders, so I felt I was in good hands.

NAVIGATION
Using traditional paper maps, Jim explained that our route would take us through fields, where there may be no discernible pathway, along fire roads in forests or rattling down twisty single tracks through birch trees with an ascent of almost 1,000m over the two days.

We compared bikepacking luggage outside the cafe. Bikepacking is possible due to the new generation of luggage available from some trailblazing companies using new, lightweight materials. I had a handlebar and frame bag made by Apidura, while Ian opted for a handlebar bag and seatpost bag by Alpkit.

Jim’s two bags were by WildcatGear and had an ingenious carrying system which allowed you to remove the bag but leave the attachment in place. Having the bags situated between the bars, under the frame and behind the seatpost keeps the weight more central and also streamlined. Clumsy panniers would catch on undergrowth and imbalance the bike on uneven ground. 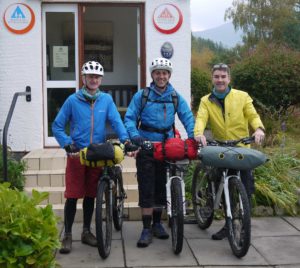 LESS IS MORE
So the key is keep it compact – and that means choosing what you are going to take, and then taking half what you wanted to take. It was my mistake to pack more than I needed, and so I ended up pulling more weight than I would have liked to. At least we didn’t have to pack a sleeping bag – many bikepackers camp out, but rather than a tent, they choose a bivi bag or a tarpaulin to sleep under. I was looking forward to a warm bed at the youth hostel.

Suitably fuelled, we made our way along the B970 to the beginning of our route, just short of Ruthven barracks, outside Kingussie. Home to government troops during the Jacobite uprising, but sacked by the defeated rebels after the battle of Culloden, the ruins are still impressive. This was the point where we went off road and began our climb up Beinn Bhuidhe.

It was pretty tough going, I’ll be honest. With no real path, we were pushing through rough grass, and it was up, up, up all the time. But what goes up, must come down, and after a brief rest at the top of the hill, we were treated to a steep, fast descent through the heather. We still needed our wits about us though, as the track concealed some slippy stones and Ian was the first to come off the bike – at least the heather provided a soft landing!

We were heading, eventually, across the River Feshie and to a wee bothy where we would break for lunch. It was a grey day with some dramatic clouds threatening to challenge the riding, which after the shaky start, become easier along gravel roads. We saw two trail runners in the distance once, but amazingly, met no other walkers or riders for the rest of the day.

Along the way, I was picking up tips from the guys on handling the bike better, how to approach hills and use the gears to my advantage. I have a tendency to stand up on the pedals when going up a hill, but that can mean your back wheel slips, as you are putting weight over the front wheel. Changing to an easier gear and “planting” yourself (as Jim put it) in the saddle means you are more stable on the climb. 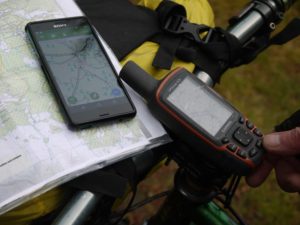 HOSTEL CALLING
Jim consulted the maps (digital and paper versions) frequently, as there are a lot of paths and trails within the National Park, and we needed to be sure we were on the right one. We made great time though, and arrived at Cairngorm Lodge Youth Hostel around 4.30pm. We were sharing a four-bed dorm, and it turned out we had the room to ourselves, which was great.

Our kit was soaked, so we braved the thermo-nuclear drying room (it really was that hot), and hung our stuff up to dry. Bikes were stowed in the locked shed at the rear of the youth hostel, and then it was time for a shower and dinner. As it happened, it was the Aviemore half marathon that weekend, and the youth hostel was full of contestants. They were up much earlier than us, so after a hearty full Scottish breakfast cooked to order, we loaded the bikes up and set off for the final part of our journey. My legs were pretty sore after yesterday’s exploits, but Jim explained that most of today would be on easier tracks. The day did seem to fly by (maybe my legs were getting used to it all), and with the promise of a cream tea at Rothiemurchus, we pressed on. 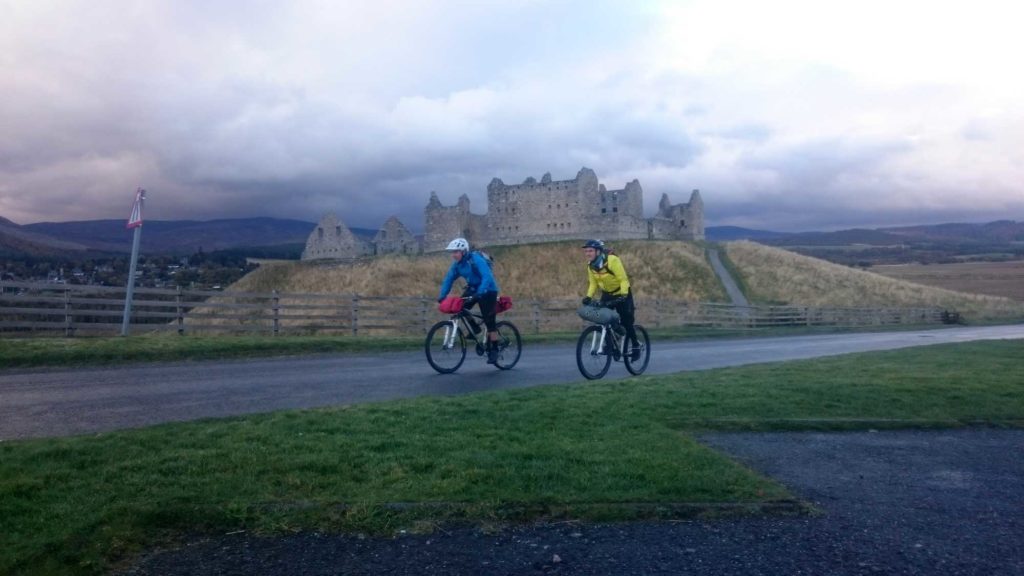 The scones lived up to expectations – and we even had some soup at the busy café. It was odd to be among so many people after our ride in the relative wilderness, and there were plenty of fellow cyclists, some of whom had hired bikes locally.

The remainder of our route followed some busier tracks, and we encountered more people on the route back to Kingussie. We had covered over 110km in the two days – an achievement for me, and in an area I’d love to explore more of.

This article first appeared in SYHA Hosteller magazine. nineonesix-guiding does guided MTB tours in Torridon and the Cairngorms and is one of the SYHA activity break partners. Visit www.nineonesix.co.uk for more information.