He may not have seen a geological wonder, but Don Currie did get up close and personal with an unwelcoming raptor.

Allow me to share with you a walk of two halves. It’s one that I enjoyed, in parts at least, at the northern tip of Arran on a sunny day this summer. It took just a few hours, but featured extremes of delight and discomfort, with a bit of drama thrown in.

I left the tranquil campsite at Lochranza and strolled along the quiet lane to Newton, which is a string of beautifully placed houses facing south-west across an inlet to the castle and harbour. All the way I was watched, not particularly intently, by the boldest red deer I have ever encountered. Dozens of them munched at the grass beside the road and on the little nine-hole golf course, so close I could very nearly reach out and touch them.

Where the houses ended, so did the road and I followed a good, springy path, part of the Arran Coastal Way, as it began to curve round the shore towards the Cock of Arran. Hereabouts, I knew, was a rock feature called Hutton’s Unconformity, which I was quite keen to see. This is the spot where the 18th-century geologist James Hutton spotted sedimentary rocks tilted upwards, with much later sedimentary rock layers on top of them, at a different angle. His observations, together with others made elsewhere in Scotland, led him to conclude, correctly, that the earth was far older than others had thought.

I’m no geologist, to say the least, but I loved the phrase Hutton’s Unconformity and was quite keen to see it. I dare say I did, but if so, it wasn’t that obvious. I saw no end of rock outcrops, with some signs of layering and so on, and one of them was probably the one that made Hutton so happy. Now I’m not usually an advocate of wee signs littering the landscape, but I think there’s a case for one here – unless, of course, there is one, in which case I missed the Unconformity altogether. 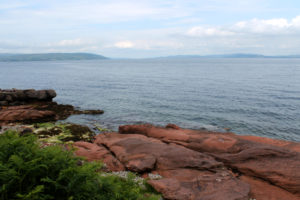 No matter. I was still enjoying my walk, in glorious sunshine. Over my left shoulder the little Lochranza ferry plied the brilliant blue water to Claonaig, on the Kintyre peninsula. Dinghies performed turns, some of their occupants waving cheerfully to me. Gulls, terns and cormorants flew over the waves, a rock pipit fluttered about just ahead, a skylark sang, and what I think was a redpoll flew through the trees to my right.

All was well as I followed the path, very well maintained, and in parts actually created, by the Arran Access Trust. My OS map showed a certain Ossian’s Cave round about here, and in an echo of my Unconformity experience, I failed to definitively identify said cave. There were a number of contenders, but which one was Ossian’s, which seemingly has some interesting carvings inside, I wouldn’t like to say.

This didn’t bother me in the slightest. My mood was as sunny as the morning, but it was about to darken as I decided to turn inland in order to cut across the headland and return to Lochranza in a straight line. I began tramping up a steep slope, through bracken. The slope grew steeper, the bracken thicker and taller, and the ground underfoot boggier. But as well as being boggy, it was very uneven, with rocks and tree trunks lurking among the vegetation, so I kept stumbling.

Away from the sea breeze, I was sweating and attracting the attentions of flies. Several times I disturbed deer, much more timid than the Lochranza ones, which sprung up from the bracken a few feet ahead of me and bounded away. “This is prime tick territory,” I said to myself, glancing frequently down at my bare and by now much scratched, legs.

Eventually the head-high bracken thinned, the slope eased off a bit, and I had only the boggy ground of Torr Meadhonach to contend with – or so I thought. In the sky to my right, a bird of prey circled. It was making what sounded like an alarm call – a single note repeated in groups of 10 or 12. It was smaller than a buzzard, bigger than a kestrel, and as I wondered what it might be, it flew closer. Much closer. It was coming straight for me, so I whipped off my small rucksack and held it above my head. The hawk pulled out of its dive as it got to what seemed about six feet from me, but may have been more. It circled around and came in again, repeating the dive several times until I turned 90 degrees to my left and marched quickly away, knowing when I’m not welcome. Having sounded out sundry experts, I now believe this to have been my first hen harrier, protecting its young, and on balance I’m very pleased to have encountered it, though I was glad of that rucksack. 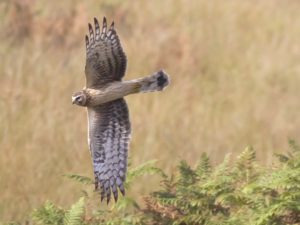 I headed west and stopped to eat my sandwiches at a vantage point looking down over Lochranza. I got out my latest accessory, an excellent Jetboil Zip Stove, and made myself a comforting cup of coffee before stumbling my way down through another belt of very dense bracken and tramping, quite dishevelled, back to the campsite.

Would I do it again? Yes, definitely, not least for another bash at seeing the Unconformity. But next time I’ll keep going round the coast a bit further, to Laggan, where, according to my map, there’s a path that will lead me back to the start. No idea what it’s like, but it can’t be worse than the route I took.